Thank you for your bug.
I tried to reproduce it.
But it's as designed.

I’m a founding member of Thinking Ink Press. I’m a ten-year attendee of Write to the End, a creative writing group in San Jose, CA led by author and artist Keiko O’Leary. I test software at a well known file sync company. I write stories; they aren’t published, you can’t see them. I write sci-fi and fantasy — I spill science and history into my fantasy, and fantasy into my sci-fi. I meditate and study Jungian psychology, ancient myths, and spirituality in my free time.

I <3 Star Trek and The Wheel of Time, Buffy the Vampire Slayer and Northern Exposure. (I was a child of the 90s.) I wish Voyager spent longer on obstacles instead of resolving them within an episode. I think fairies are wicked, and Santa Claus is the secret love child of a Fairy Godmother and a Father Frost. I wonder what the world would be like if apartment buildings had hot-swappable rooms like VMWare hosts have CPU and RAM.

I blog sometimes. Sometimes I stop, because I have too many disconnected things to talk about, and you probably only care about some of them. Roman history is fascinating, as is Tudor England, and, just by the way, lords were often women in medieval France, far oftener than history books claim.

I majored in Computer Science and History, because they’re so closely related; I travel and I knit; I love fermenting food; cats are better than dogs; and it turns out that editing books is a lot like testing software, and I’m good at both.

I hope you’ll stay and find something interesting to read. 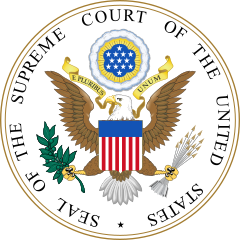 I’ve been having fun digging into Supreme Court cases lately.  It started with listening to the oral arguments for the DOMA case in April, and then reading the full texts of the opinions and dissents about DOMA and Prop 8 in June.  But then it branched out.  I read the petition for writ of certiorari (that’s the document asking the Supreme Court to take the case) for a case about a murderer/rapist who pled guilty, but then the jury deciding his sentence were told they could take into account the fact that he didn’t testify as indication that he didn’t feel remorse, so they gave him a more harsh sentence than they otherwise might have (though honestly, it was probably going to be harsh regardless).  He’s arguing that the fifth amendment gives him the right not to testify against himself, but the other side is arguing that that only applies during the trial, not during the sentencing.  FASCINATING, I tell you.

One thing that surprises me is that the court documents are remarkably easy to read.  They’re very very long, but each document (at least, the petitions and the opinions) clearly explains what the issue is at the beginning and why it’s before the court.  So you can really start at any end and understand enough to keep going.  And when the opinions and dissents cite precedent, they (almost) always explain what the relevant aspects are and why they apply here, so you don’t have to already know the cases in order to understand the point they’re trying to make.  You just need to have a few hours.  🙂

One thing I love about the oral arguments is how the justices are often funny or snarky.  And they’re all clearly smart*, so they don’t waste time discussing things they already understand.  You have to have a strong constitution to be an attorney in front of them**, because the justices interrupt all the time and then expect you to be able to pick up right where you left off, almost mid-sentence***.  Just today I was listening to a case about whether Maryland police (and therefore any police) should be allowed to take DNA samples of arrestees before they’re convicted, and after answering several questions in a row the lawyer said, “and to answer the question Justice Breyer asked a few minutes ago…“.  Because he was able to keep up with 9 justices, and remember to get back to previous questions.  Impressive!

Another thing that surprised and pleased me is just how hard the Justices work to keep their hands out of the decision-making unless they absolutely must. They want to tell us what the constitutions and laws say, not to decide what they ought to say.  In DOMA they tried incredibly hard to conclude that they shouldn’t make any ruling, and in the Prop 8 case they did conclude that they shouldn’t make any ruling.  Not because the issue wasn’t valid, but because the petitioners, who were defending Prop 8, don’t have standing to bring the case before a federal court.  This ends up being more interesting than the debate about same-sex marriage, in the long run.  California has a ballot initiative system so that the people can create laws even when we don’t trust elected officials to get it right.  For any law, it’s the responsibility of the Governor and the State Attorney General to defend the law in court.  In this case, they opted not to defend the law, so the people who put Prop 8 on the ballot were allowed to defend the law.  Because the Supreme Court decided that those people don’t have standing to defend the law, it means that no one seems to have standing except the governor and attorney general, who are elected officials.  So if the people don’t trust the elected officials, so they propose and vote for a ballot initiative, but then the elected officials choose not to defend the initiative, then the people don’t really have power over the elected officials after all.  Uh oh.

And this is why the supreme court tries to be very careful about which cases it makes any decisions about.  The Prop 8 decision seems like a non-decision, except it has huge implications for all other ballot initiatives being challenged in court.  Every decision they make has implications.  Woah.

*  Although who can tell with Clarence Thomas, he never talks…

** I’m almost certain there’s a specific phrase for this, but I can’t think of it.

*** One of my CS profs had this ability.  In class he’d be lecturing, stop mid-sentence or mid-thought to answer a question, or sometimes several, and then would pop the last idea off the stack and resume as though there had been no interruption.  Since he taught me about stacks, I thought that was pretty cool.

Your humble host. View all posts by Liza

2 thoughts on “My current obsession: the Supreme Court”

This site uses Akismet to reduce spam. Learn how your comment data is processed.